Proactiv Solution (Original) 3-Step System Review: The original Proactiv system launched back in 1995, and in the 20+ years since, it has grown into one of the most popular acne treatment systems in the world. But can it really clear your acne and why do we prefer Exposed🏆?

Proactiv was created in 1995 by dermatologists Katie Rodan and Kathy A. Fields, who later went on to start their own skincare company called Rodan+Fields. The product was mainly promoted via infomercials and is one of the most highly marketed acne treatments in the United States and in some other countries around the world. Proactiv has used many big-name celebrities to promote its products including Sean Combs (Puff Daddy) and more recently Katy Perry, Justin Bieber, and even Adam Levine.

In March 2016, In March 2016 Guthy-Renker Corporation partnered with Nestlé Skin Health SA as a majority owner of Proactiv. Guthy-Renker is a massive direct response (infomercial) television company. Infomercials not only sell Proactiv, but also exercise videos, make-up, Rock n’ Roll concert albums and DVDs of The Dean Martin Variety Show. This is one reason why there have been so many TV ads and infomercials for Proactiv.  Nestlé is the world’s largest food and beverage company. Nestlé’s products include baby food, medical food, bottled water, breakfast cereals, coffee and tea, confectionery, dairy products, ice cream, frozen food, pet foods, and snacks.

Over the years, Proactiv has developed a variety of formulas for their products, and they currently sell three different acne systems: the Proactiv Solution 3-Step System, Proactiv+, and ProactivMD. This review focuses on the Proactiv Solution (original) 3-Step System because it has been around since the beginning, though it has undergone several formula adjustments over the years. The current formula is the most used Proactiv solution, but it still isn’t our top pick for the best acne system.

Even though Proactiv isn’t our top pick, it’s still a powerful acne treatment system with many benefits for your skin. First, it’s widely available and easy to access. There are even Proactiv vending machines in various locations. This means it’ll be easy for you to stay up-to-date on your skincare routine, which is important for maintaining clear skin. Second, it includes one key acne-fighting OTC ingredient, benzoyl peroxide. Third, it also incorporates a few soothing natural ingredients to keep the skin from getting irritated, such as chamomile extract and aloe vera extract. There is a good chance you could experience some success while using Proactiv due to these key benefits.

No Salicylic Acid?! The main reason we don’t love the Proactiv Solution 3-Step System is because it doesn’t include salicylic acid. This ingredient is absolutely key when it comes to getting rid of blackheads and whiteheads and works with Benzoyl peroxide. Glycolic acid also good for your skin but it is a skin surface exfoliant but doesn’t penetrate into the pores like salicylic acid. We highly recommend seeking out an acne treatment that utilizes both benzoyl peroxide and salicylic acid.

Another reason we hesitate to recommend Proactiv because the reviews on Amazon are often less-than-stellar. Many people report that the system dries out their skin, and some people even noted that Proactiv seemed to cause cystic acne, which they had never experienced before.

If you want clear skin that’s free of acne, Proactiv might work, but it might not. Be prepared for any result.

Proactiv sure has made a name for itself on TV but it also has left many users searching for an acne treatment that does more and does not dry out their skin. Overall, we believe the Proactiv Solution 3-Step System could help some people get clear skin, but it’s definitely not for everyone. If you have particularly dry, sensitive skin, we recommend staying away from Proactiv, but if your skin is oily and resistant, and you typically have far more pimples than blackheads or whiteheads, then Proactiv could be an option for your skin. Proactiv does not contain many natural ingredients shown in the chart and it may be harsh on your skin. Also, Proactiv’s 60-Day guarantee might be too short for some users to really test the product out.

Better than a strong acne medication? The Journal of the American Academy of Dermatology found that Benzoyl Peroxide + Salicylic Acid produced even better results than a leading non-OTC product: so it might be best to look for that combination in the acne treatment you choose.

Discover which acne treatment is best for your skin. Below we compare the most popular, best-selling complete acne treatment systems available on the market today3.

Acne Kit Descriptions with Plus and Minus 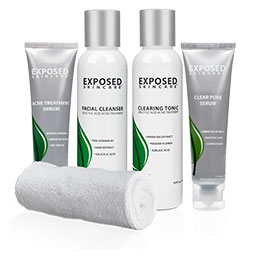 Our Top Recommendation – If you have sensitive skin, this kit is definitely a good option for you. This product has all the key ingredients and more, utilizing both scientific and natural actives to effectively treat and prevent all kinds of acne, from blackheads to pimples. It contains benzoyl peroxide to help treat pimples, salicylic acid, and glycolic acid to treat blackheads and whiteheads, and it contains green tea, aloe vera, and passionflower extract to reduce inflammation and redness.

High-quality ingredients with an ideal combination of active ingredients, this kit has the highest customer ratings on both Amazon and Google Shopping, & comes with a full one-year money-back guarantee.

Although it is still generally very affordable, this kit is slightly more expensive than some of the other kits in this list. 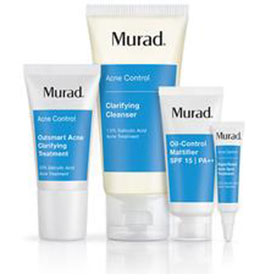 This kit is designed to treat and prevent very mild acne and works best with normal to oily skin. It contains salicylic acid, which helps open pores and fights blackheads and whiteheads, and sulfur, which helps dry out excess oil. It also contains a few natural ingredients, like passionflower and sage extract, which can both help reduce inflammation.

This acne treatment kit is the most affordable option in this list, making it a great place to start if you are hesitant to invest too much money into your skincare right away.

The products in the Murad kit do not contain ingredients that effectively prevent or treat pimples (pustule or papules), though it is a good solution for treating white/blackheads. 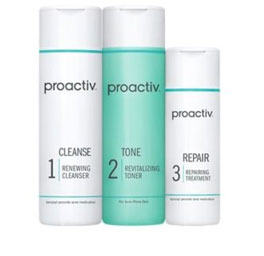 Proactiv is probably the most popular acne treatment kit on the market, but does it work and is it the best? If you have very oily skin that is non-sensitive, then it could be. It contains benzoyl peroxide to help reduce pimples and some natural actives, like aloe vera extract to reduce inflammation. Together, these ingredients can potentially improve your acne.

With benzoyl peroxide in two of its three products, this kit could be a good choice for people with resistant, non-sensitive skin who have an especially hard time with pimples, however, it lacks Salicylic Acid.

The Proactiv kit contains fragrances and dyes that can easily irritate sensitive skin and cause increased inflammation, and as a result, increased acne. Many complaints about Proactiv can be found online. 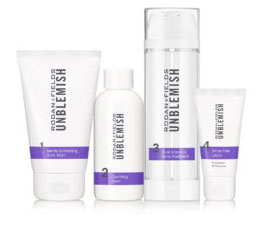 This kit is a good option for those who have both oily and sensitive skin. The benzoyl peroxide effectively treats pimples, while the sulfur helps dry out excess oil that can contribute to blackheads and whiteheads. It also includes sage and green tea extract, to help prevent sensitive skin from having an inflammatory reaction to the benzoyl peroxide or sulfur.

This kit is the best one in this list for skin that is both oily and sensitive.

Unfortunately, this particular kit is far more expensive than the other options by nearly $150.

1 Click here to find out when seeing a dermatologist is absolutely necessary and the first thing you should do.

3 Check marks represent the amount of acne fighting and skin repairing ingredients in each product, using science and nature.